Modern industrial facilities deal with numerous materials and substances that may endanger life and health of citizens as well as ecology. For this reason, one of the duties of any plant or factory is the maintenance of safety measures. Such measures include the provision of courses raising awareness of the personnel about hazardous materials and emergency management. Moreover, an industrial facility restricts access to dangerous substances for the staff that is not authorized to work with dangerous materials. However, there is always a risk of emergency due to the human and technological factors. Therefore, it is important to introduce additional improvements in the list of safety measures to ensure the level of security. From time to time, the specialists in industrial safety introduce some improvements based on emergency case studies conducted throughout the country. Consequently, the following paper aims at analyzing the case study of a runaway reaction that occurred at T2 Laboratories, Inc. Furthermore, it investigates the case scenario, discusses the chemistry process presented in the materials, and provides instructions that could enhance safety measures by preventing leakage and exothermic reactions. The paper also defines the concept of an exothermic reaction, its consequences and prevention schemes.

In order to understand the concept and results of an exothermic reaction, one has to review the investigation report of the case provided by the U.S. Chemical Safety and Hazard Investigation Board.

T2 Laboratories, Inc. (T2) is a manufacturer of chemicals whose factory is situated in Jacksonville, Florida. At 1:33 pm on December 19, 2007, an explosion and fire destroyed the whole site of the factory (Figure 1). The explosion had significant power because it was heard and felt 15 miles away from its center. Consequently, it killed four T2 employees and injured 32 people, four of whom were the employees of T2 (T2 Laboratories Inc. Reactive Chemical Explosion – Investigations, n.d.). The power impact from the blast could be evaluated by the damage it caused to the nearby buildings. Thus, whereas the debris from the explosion spread approximately a mile away, buildings within a quarter of a mile were damaged. Consequently, a trucking company adjacent to T2 was closed due to the loss of business (T2 Laboratories Inc. Reactive Chemical Explosion – Investigations n.d.). 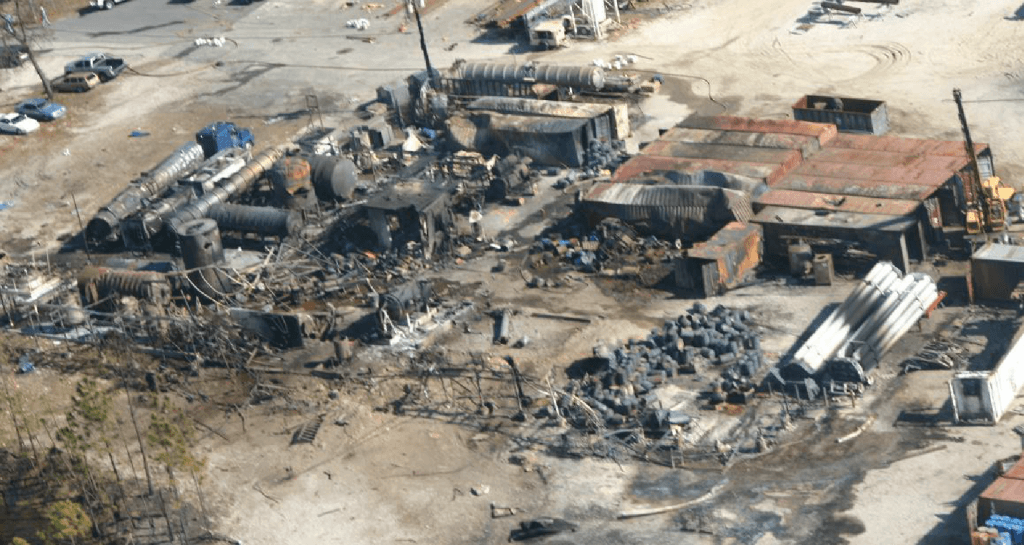 The destroyed facility produced methylcyclopentadienyl manganese tricarbonyl (MCMT). It used a chemical batch reactor that had a problem with the maintenance of the produced heat. Thus, at 11:00 am, the operator initiated the reaction to melt sodium. At the temperature 210°F (98.9°C), the operator started the agitator, and the temperature of the reactor began to increase. The operator followed the instructions and turned off the heating system once the temperature reached about 300°F (148.9°C). Although, the reaction continued increasing the temperature, and when it reached about 360°F (182.2°C), the process operator started cooling, which, unfortunately, did not produce the desired effect. Eyewitnesses recounted seeing venting from the top of the reactor and hearing a loud jet engine-like sound immediately before the reactor exploded (T2 Laboratories Inc. Reactive Chemical Explosion – Investigations, n.d.). The process operator reported the problem at 1:23 pm, and the co-owners of the factory came to assist him in dealing with the problem. At 1:33 pm, the reactor ruptured killing the owner and process operator in the control room. As a result, 13 emergency organizations of different levels responded the explosion and the subsequent fire (Figure 2). 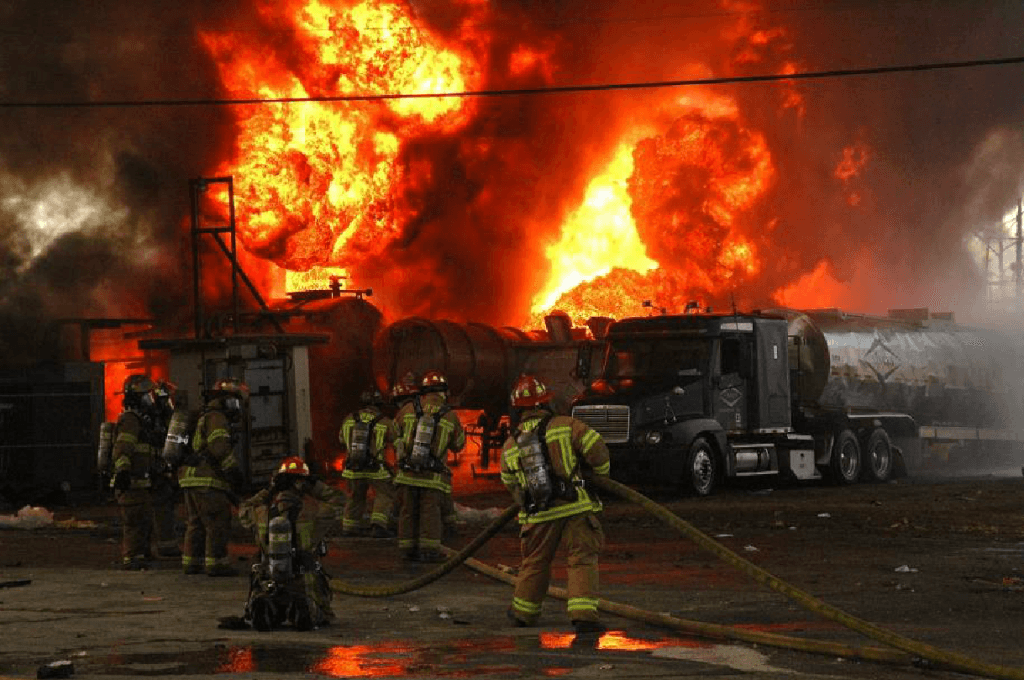 The Chemistry of Exothermic Reaction and Strategies of Its Prevention

The dangerous substance involved in the production level that led to the explosion was MCMT. The report of the accident characterizes it as an organomanganese liquid, a combustible compound used as an octane-increasing gasoline (T2 Laboratories Inc. Reactive Chemical Explosion – Investigations, n.d.). Its peculiar characteristics are inhalation toxicity and quick skin decomposition when exposed to direct light. Consequently, US Environmental Protection Agency (EPA) designates it as an extremely hazardous substance whereas National Institute for Occupational Safety and Health (NIOSH) and Occupational Safety and Health Administration (OSHA) set exposure limits for MCMT (T2 Laboratories Inc. Reactive Chemical Explosion – Investigations, n.d.).

The method of MCMT production used by T2 was a batch reaction. During such reaction, the process operator puts a certain amount of substances or materials into a reactor so that the whole spectrum of reactions happens within. It is important to say that the production of MCMT involves an exothermic reaction. These kinds of reactions occur with the release of heat. The typical example of an exothermic reaction is burning of wood. It involves oxygen (O) and cellulose (C6H10O5) to produce carbon dioxide (CO), steam (H2O), and heat. The chemical reaction describing the process is C6H10O5 + 6O2 = 6CO2 + 5H2O + heat (What is an exothermic reaction?, 1999).

Due to the fact that MCMT production involves an exothermic reaction, it requires the reactor to be equipped with the appropriate cooling and exhaustion systems. The rates of cooling and exhaust should be higher than the calculated pique temperature to prevent the explosion of the reactor. Such measures are necessary to dissipate the produced heat. However, in case the reaction proceeds rapidly, it is impossible to disperse the energy that grows exponentially. Consequently, the volume and construction of the reactor fail to allow the heat to dissipate, or the produced energy to deposit, which leads to the explosion.

It is obvious that the case scenario supports the theory of the batch production involving exothermic reaction. For this reason, lack of dissipation during rapid exothermic reactions in industrial processing needs to be properly managed. As a consequence, the introduction of additional emergency cooling and exhausting systems can be proposed. The essence of such systems is the combination of advanced capabilities of the reactor. They have to increase the volume and exhaust rate of the reactor and ensure the rapid cooling that involves cooling agents similar to liquid nitrogen. It could be effective to surround the reactor with the copper tubes filled with liquid nitrogen. Additionally, the reactor should be constructed with materials that can cope with significant pressure produced by the reaction. Moreover, the facilities require additional instructions for the cases of emergency to rescue technical personnel before the explosion. The proposed measures would drastically reduce the probability of exothermic reactions causing the explosion of batch reactors.

The analysis of the proposed scenario concludes that the industrial facilities need additional equipment to manage rapid exothermic reactions. The presented case argues with the danger of batch processing that involves exothermic reactions. Due to the fact that such reactors may produce a vast amount of heat, there is a probability that its cooling and exhausting systems are not designed to manage it. Thus, additional volumes to the reactors and enhanced cooling systems with liquid nitrogen should be provided. Furthermore, it would be beneficial to introduce additional instructions aimed at the timely rescue of the staff before the threat of explosion. The proposed measures would ensure the secure management of the chemical processes that involve batch reactors and exothermic reactions.