Everyone understands the importance of healthy sleep. However, not everybody knows the essential functions of sleep, its effects on people’s health and the harm that the lack of sleep does to their body and mind. It is a necessary part of the human nature. Without it, a person cannot function normally.

People have invented a lot of false stories associated with the sleep. Some of them even think that during the sleep an individual falls into oblivion, the state of nothingness. In fact, throughout the sleep, a person is conscious; the brain is active; the eyes, ears and other parts of the body function, too. It is obvious that the work of the heart does not stop; people can feel the heartbeat and the breathing. These activities are very useful during the sleep as they help to stay conscious and alert while asleep. Sadly, humans know only the part of truth about sleep. Unfortunately, there are still a lot of secrets and mysteries associated with it. However, everyone knows about the importance of sleep and the harmfulness of sleep deprivation.

The sleep deprivation is not a new concept; people have had sleep-related problems for a long time, but only recently, its effects have been studied and understood. It is true that the levels of sleep deprivation are increasing with a great rapidness causing physical and mental problems, doing harm to the whole mankind.

There is no doubt that people do not want to hurt themselves intentionally, and almost everyone knows the benefits of sleep. However, the rhythm of their lives nowadays is so quick due to modern technologies that they cannot afford to be inactive for 7-8 hours a day. Nevertheless, they must bear in mind that the negative influence of sleep deprivation may be irreversible.

Due to the technological advancements, industrial and information revolutions, there are a lot of supermarkets, restaurants, hotels, airports, and other services that are open for 24 hours a day. Workers such as policemen, doctors, nurses, firemen are required to have shift work. Many people are starting to work remotely, at home, and they do not have a regular schedule. Moreover, a lot of individuals work overtime or even have two or three jobs in order to earn for the living. The saddest fact is that such cases are not rare. It is the problem of the whole society.

As it was stated before, sleep is not the period of the total tranquility and rest, as some people believe. The process of sleeping is rather complex but very interesting. In fact, some parts of the brain work more actively when the person is asleep than during the period of awareness.

There are also different sleep stages and each of them has its peculiarities and importance. There are also two essential aspects of the sleep: intensity and duration. Duration is the length of the sleep. It is important to receive enough amount of sleep per 24 hours. The duration depends on the age and some specific features and needs of a person. As for the intensity, it is more complicated and even more important aspect of the sleep as it indicates its quality. It means the depth of the sleep. For example, you can sleep for 8 hours or even more, but in case your sleep reaches only light stages, you will get up with the feeling of tiredness as if you have not slept at all. A person should not expect anything useful from that kind of sleep.

Sleep is one of the most vital needs to survive, such as water or food. The continued sleep deprivation leads to death. The experiments on rats can be demonstrative in this case. The researchers used the disk-over-water method to make them awake for 2–4 weeks. Such an approach showed that metabolic rate increased and body weight was reduced. Actually, it ended in death (Bautista, 1994).

One can name many negative consequences of the sleep deprivation. There is no doubt that it can have bad effect on people’s body and mind. First of all, sleep deprivation leaves negative marks on the humans’ brains. A person who has insomnia may feel not only exhausted, but also annoyed, nervous, anxious, and depressed. It occurs due to a lack of stimulants sent to the brain (Kushida, 2005).

The students, teenagers and young people are more likely to be at risk. Almost 17% of young people, who lack sleep regularly and during a long period, may suffer from severe depression. It is particularly important for teenagers to get sufficient amount of sleep. Their young bodies that are at the last developing stages need a lot of energy. They need to sleep properly to be stress resistant and socially adapted. As the studies have shown, young people who suffer from the loss of sleep or insomnia are at risk of suicide. The teenagers should get full nine hours of sleep every night to avoid the fatal consequences (Chervin & Hershner, 2014).

The students who sleep less than 8-9 hours also have a lowered academic potential. Such learners are often inattentive, and their thinking and studying abilities slow down as well. It is true that such people become forgetful, so if you wish to have sharp memory, you should have full and high-quality sleep. Lack of sleep causes troubles with concentrating and remembering among adults as well, and sometimes, it leads to everyday problems and even to the dangerous consequences. 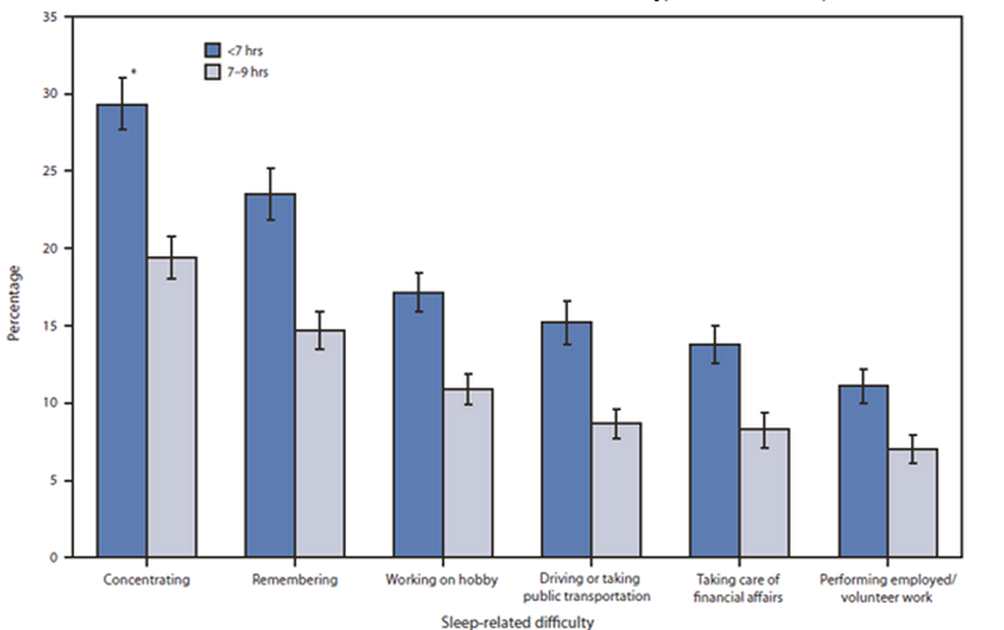 According to the figure, people who slept less than seven hours (marked in dark blue) were approximately 50 percent more likely to have some troubles. The main problems were with concentrating, remembering, working on a hobby, driving or taking public transit, taking care of financial affairs, and working. It is obvious that individuals who have some financial problems cannot fall asleep as they are constantly thinking about them. It leads to the sleep deprivation, which, in its turn, reduces the concentration and attention (Clemmitt, 2010).

Furthermore, there are a lot of health issues caused by sleeplessness. Sleep-deprived people often have problems with their skin. It is mostly important for women as any female does not want to have dark circles under her eyes. Premature skin ageing occurs in such case as well. When a person does not get enough sleep, cortisol level increases in the body. Cortisol is a stress hormone, and it can damage collagen. In its turn, collagen helps to make skin resilient and elastic, young and smooth.

Another severe problem is obesity. More than 70% of overweight people confess that they do not receive enough sleep. Chronic lack of sleep can also cause such serious illnesses as diabetes, high blood pressure, stroke, heart attack and other heart diseases (Fulke & Vaughan, 2009).

Additionally, if a person has sleep disorders, some parts of the brain stop working in a proper way. It affects such body functions as temperature, heart rate and what is the most dangerous, hormone level.

It is also known that sleeplessness causes accidents both on the road and on the job. The researches show that not enough amount of the quality sleep can lead to the injuries or other accidents at work. According to the studies, workers or drivers who frequently complain that they suffer from the constant sleepiness are more likely to have car accidents or injuries if they work with different kinds of machinery (Clemmitt, 2010).

To sum up, it is necessary to say that it is very important for modern people to understand the significance of the sleep. They must realize that it is as vital for their lives as water or food. Many individuals usually do not pay any attention to the duration and quality of their sleep. As a result, sleep deprivation is increasing nowadays, and it can cause many severe health problems, sometimes even irreversible and fatal. If more people have enough high-quality sleep, the whole society will be healthier.