Some themes or symbols can be found in different historical periods. These recurring symbols usually play a very important role in the development of humanity. One of such important themes is visual representation of leaders, monarchs or nobles. Despite the fact that the public attitude towards this social group constantly changes, artists always portray these people making use of some traditional iconography, but, at the same time, they incorporate elements that reflect the current interpretation of the monarchs role in the society. This paper is devoted to the analysis and comparison of the two paintings Queen Catherine (1665) by Peter Lely and The Queen (Brazilian Theme) (2012) by Romero Britto. These paintings reflect the changes that occurred in the way artists portrayed the social class and treated the image of a monarch, but the comparison of these art works also shows that despite more than three centuries, time difference between these works preserves some elements of classical iconography typical of this sphere. 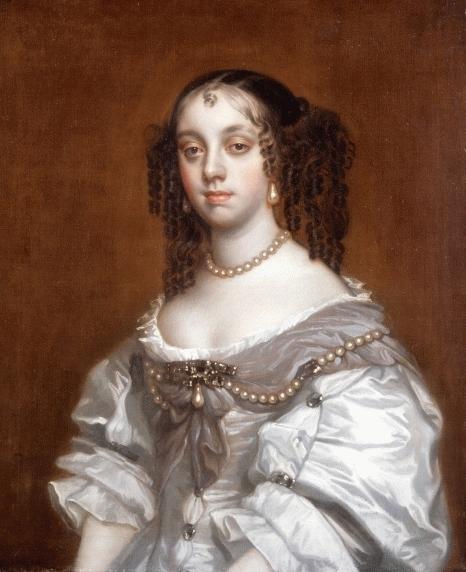 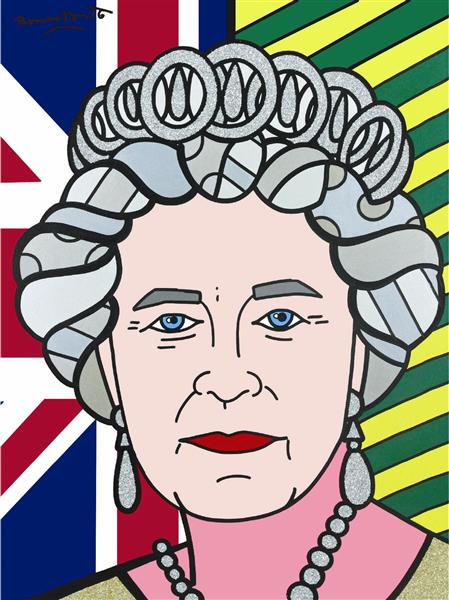 The portrait of Catherine of Braganza who was the English queen from 1662 to 1685 is an example of classical seventeenth-century portraiture. This painting was created in 1665 when the queen was twenty-seven years old (Golby and Purdue 192). The artist Peter Lely exerted every effort to combine the concepts of power and elegance in this painting. Lely was an artist of Dutch origin, but he spent almost all his life in England where he reached success as a popular and celebrated portrait painter. He managed to combine the traditions of the Dutch Golden Age of painting and the influence of the English art. The seventeenth-century art was generally referred to as Baroque, but starting from the middle of the century, it began to incorporate some classical elements that would gain more power at the beginning of the eighteenth century.

The artist carefully and inventively uses the elements and principles of design to communicate the required messages to the audience. Catherine of Braganza is represented in this painting as a very dignified and graceful woman who prefers elegance to fancy expressions of wealth. Lely pays much attention to the colors used for this painting. The queens dress is done in soft shades of grey and white. This color scheme is also intensified by the choice of the jewelry that the queen wears. Large milky pearls and the dark glittering metal of the central brooch make the image of the monarch very reserved and sophisticated. However, to draw additional attention to the figure, Lely uses rather dark background that creates impressive contrast to the lightness of the queens dress and skin. However, the general color scheme is quite warm as it had to correspond to the traditional representation of women in the seventeenth century art when femininity and grace were considered top qualities for any female. This impression is also realized via very soft shapes used in this painting large soft sleeves of the dress, round pearls, etc.

Woodall argues that realistic approach to the portrayal of noble men, such as kings, queens and outstanding military commanders, was a defining aspect of the seventeenth-century Dutch portraiture that had a profound influence on the Lelys style (100). Therefore, Lelys methods of depicting the English queen not only correspond to the general artistic tendencies of this period, but also prove that one of the primary tasks of the painter was to highlight the high social status of the sitter.

The primary audience of this painting was supposed to be people who visited the residence of English monarchs as it was one of the official portraits that Lely did for Catherine of Braganza. The queen liked the artists style and commissioned him to paint several more portraits after the 1665 painting (Golby and Purdue 193). Perhaps, one of the peculiarities of the Lelys work that the queen liked was his ability to highlight the status without giving much reference to politics as Catherine of Braganza preferred to stay away from this sphere. She was quite an unpopular consort as she was Roman Catholic, and it was not appreciated by the English society. Therefore, Lelys portrait of the English queen perfectly reflects both the artistic tendencies of the period and cultural circumstances crucial for the deep understanding of the portraits messages.

A different strategy is applied by a contemporary artist Romero Britto who portrayed the current queen of Britain Elizabeth II. In his oeuvre, Romero Britto combines elements of cubism, pop-art and graffiti; he also uses stencils quite often. His works excel at bright colors and uncommon, edgy patterns that help the artist to express his optimism, hope and trust in a possibility of a better world. Throughout his career, Romero Britto has worked with many famous brands, such as Audi, Coca-Cola, Disney and others, though his first famous work was for the Absolute Vodkas Absolute Art Ad Campaign shortly after his move to Miami, Florida in 1989 (Britto 16). Along with making art for commerce, Romero Britto supports, both financially and with his art works, charitable organizations all over the world. As many other works of Romero Britto, this portrait is done in the traditions of contemporary pop art, but it is slightly different from the works that were created in the late 1950s and 1960s, when this art movement was at its peak. Britto makes it more cartoonish. It is also less aggressive than the works of the celebrated leaders of this movement, such as Roy Lichtenstein or Andy Warhol (Stallabrass 173).

This portrait of Elizabeth II was done to celebrate the Diamond Jubilee of the queens reign and was supposed to be unveiled at the meeting where the queens grandson Prince Harry had to be present (Britto 56). The face of the queen, just as in case of Lelys work, also occupies the central place of the image. Although Romero made the face of the queen cover almost the whole canvas, the effect is similar all the attention of the audience is drawn to the sitter. Another important similarity between these two works is that both women look directly into the eyes of a viewer. It is not very typical in classical female portraits as usually women look aside or at some male present at the painting. The direct gaze has always been interpreted as a proof of power, authority and advantages that women have long been deprived of. The women at the portraits created by Lely and Britto are not afraid to look directly at a viewer as they are aware of their high social status and power. Moreover, despite the fact that Brittos portrait contains some elements that are not usually associated with classical feminine beauty (thick grey eyebrows, degrading nasolabial folds, etc), the queen also wears the earrings that are very similar to those painted at the portrait of Queen Catherine. It proves that although the artists are free to express their own interpretation of the monarchs, the queens are obliged to follow certain cultural and aesthetic code and exert every effort to correspond to the approved standards. These earrings and the crown are the manifestation of the queens connection to a very long historical tradition that managed to survive even despite many social, political and economic changes that took place.

One of the differences between the portraits is that lines and shapes play much more important role in Brittos works than in the portrait of Queen Catherine. Neo pop art pays much attention to the expressive elements, so Britto uses quite bold colors. This impression is intensified by the black lines of various thickness that are supposed both to divide the shapes of different colors and unite the whole composition. Very important elements of Brittos work are flags that are located at the background. Britto works in a modern globalized society where the connection between different countries becomes increasingly important. It may partially explain why a Brazilian artist (now residing in the USA) pays so much attention to the British queen. The British flag and the yellow and green stripes symbolizing Brazil, from Brittos perspective, reflect crucial links between these countries. Another interesting element of this painting is the artists attitude to the portrayal of a person of a very high social status. The queen is depicted with much respect, but, in fact, her image is reduced to a cartoon image and a page from a comic book. The monarch in the modern world occupies the same social niche as, for instance, a football star or a superhero from a Hollywood movie. In the minds of the public, monarchs are no longer unreachable elite, but ordinary celebrities that can perfectly fit into a pop art painting.

To conclude, the works of Lely and Britto are perfect reflections of the changes in the perception of the social status. In the seventeenth century, the primary goal of a monarchs portrait was to highlight his or her power and richness, thus drawing attention to the high social status, whereas the modern society is much more democratic. The role of monarchs has significantly changed, and now, instead of classical realism, they may be depicted in a pop art manner.