Old Spice Advertising in the Flow of Time

In 1473, the first printed advertisement appeared in England. The creator of it was William Caxton. He used handbills to attract the potential buyers. At first, the commercial was not the instrument of mass influence (Barker and Hosington 186). Nevertheless, the situation has completely changed in the 20th century. In 1929, advertising was resorted to on a major scale in the U.S. Benjamin Franklin, known as the father of commercials, published the Pensylvania Gazette, in which tea, wine, chocolate, and many other items were advertised (Tyagi and Kumar 11). In the 20th century, it was believed that the main mechanism, which helped to achieve the success in advertising was the combination of main rhetorical tools, mainly logos, ethos, and pathos. Nevertheless, with the flow of time, it was revealed that it was not enough. As modern people are overloaded with the great variety of different ads, it is possible to catch their attention only with the help of unconventional approaches and creativity. The comparison of the advertisements of Old Spice production from 1960 and 2010 is the proof of it. 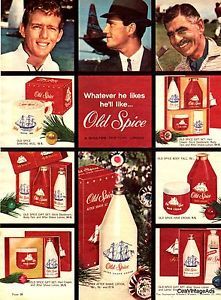 The Description of Old Spice Advertisement from 1960

In general, the poster is divided into ten small squares and one big rectangle. The three squares situated at the top of the poster present the viewers with the pictures of three men. Their style of dressing, as well as background, shows that they have different interests in life. As behind the first man, there is a ship, it is possible to suppose that he is a sailor. As the second one is looking at the plane, it is possible to assume that he is a pilot or a person, who likes flying. As the third one is holding the golf club, it is possible to presume that he is a golf player. Below the picture of the first and the third men, there are three squares, in which the production of Old Spice is depicted. Below the picture of the second man, there is a small square with the slogan and a big rectangle, showing the bottle of Old Spice. The slogan tells, Whatever he likes, hell like… Old Spice. As the commercial was published at the time of Christmas Holidays, each picture of Old Spice production is completed with the branches of the Christmas tree as well as Christmas decorations.

The Description of Old Spice Advertisement from 2010

The Old Spice poster presents the viewer with the picture of a tropical beach. In the foreground, a sexual black-skinned man, sitting shirtless on a white stallion is depicted. His head is slightly tilted forward, and eyes are shining with the fire of persuasiveness. In his right hand, he is holding the production of Old Spice shower gel. The right hand is raised. It underlines the slogan, situated in the right corner of the poster, which says Smell like a man, man. In addition, another trick to draw the attention is the foam, dropping from the shower gel. It partially merges with the image of the ocean and beach and, in such a way, makes the people stare at the place, where the slogan is situated.

The Similarity between Two Commercials

According to the rule of rhetoric, both commercials appeal to logos, pathos, and ethos.

Pathos in the commercial from 1960 is based on the tender feelings of coziness and the atmosphere of celebration, evoked by the Christmas holidays. It is emphasized with the help of the Christmas tree and decorations. In the advertisement from 2010, pathos has a direct romantic-sexual meaning. Firstly, the image of the beach and ocean arouses romantic memories. Secondly, the image of the strong, shirtless man cannot remain women indifferent.

Ethos in both commercials is incorporated in the slogan. In the advertisement from 1960, the slogan indicates that it is essential for people of different professions to look attractive. Therefore, men like them should like Old Spice on whatever occasion. In the commercial from 2010, ethos makes men think about their primary ethical function to remain true men under any condition. Ethos gains its power with the help of the play of words the repetition of the word “man” in the sentence, Smell like a man, man. The first word “man” is used in the role of adverbial modifier. The second one is accost. Accost shows that all men think that they are men, but the adverbial modifier specifies that only with the help of Old Spice, it is possible to smell like a man and become an actual man.

The Differences between Two Commercials

The first difference can be noticed on the outer level. In other words, it is incorporated in the style of depiction. The poster of commercial from 1960 is overloaded with different pictures. The viewers should divide the attention between different squares to view all the elements of commercial. In contrast to it, the poster of commercial from 2010 follows the style of minimalism. The viewers are concentrated only on one figure the man on the horse. There are no elements, which distract the attention.

The second difference can be noticed on the inner level. In other words, it is incorporated in the manner of influencing the potential buyers. The commercial from 1960 has the intention to make the impact on the traditional public of mens hygienic products males, through the traditional methods of rhetoric. Thus, the message of the slogan is built in such a way to push men to buy Old Spice as its production appeals to different professions and interests. The commercial from 2010 goes beyond these frames. Disregard the fact that Old Spice production is designed for men, the commercial makes women, but not men the intended audience. It achieves this goal with the help of irony. The poster depicts the strong man, who may be regarded as an ideal for many women. Nevertheless, in the real life, such men are the rarity. Therefore, the commercial pushes the women to choose Old Spice as the way to achieve their dream. This approach is effective in the modern society as there are many researches, which show that females are the most powerful customers in the market. For example, Kanner indicates that in the modern time, females control two-thirds of the nation’s disposable income and make 88 percent of the retail purchases in America (32). They are responsible for buying 85 percent of all toilet tissue (Kanner 125).

To sum up, the analysis of the commercials of Old Spice production from 1960 and 2010 reveals that advertising is an ambiguous notion from the point of view of development. On the one hand, advertisements from different periods use standard mechanisms of rhetoric such as logos, ethos, and pathos. On the other hand, to appeal to the changing needs of society, the commercials should apply the innovative approaches. For example, the commercial of Old Spice from 2010 directs the message not to men but to women, who are the most powerful consumers in the modern market.