The data discussed by the World Bank marks the financial efficacy of individual banks and the related financial institutions within the countries. The methodology that is employed to derive the data is presented in the excel sheets. The calculation of the indices commences with the establishment of the balance between buffers and risks that exist within the financial market of each country that is under study. The buffers are the returns and the level of capitalisation that exists in the economy (International Monetary Fund 2006, p. 19). Risks as the extent to which the returns are made in the economy become volatile. The sample size of the data that is presented in the excel sheets are two hundred and three countries. In addition to measuring the stability of the financial system of the countries, the data aims to determine the financial depth, access and efficiency of the financial institutions in the countries that fall within the sample.

The measures of the data in the excel sheets are presented in percentage. Therefore, the data is the mark of score of the specific issue under study within the range of 1 to 100 (International Monetary Fund 2006, p. 19). The provision of the percentages enables one to measure the scores of difference countries to determine the ones that are more financially stable. The presentation of the percentages across years enables one to compute the line graphs. In fact, the line graphs enable one to understand the growth rates and the changes in the strength of financial stability of the respective countries that are under investigation. It is worth noting that the study applies quantitative data. The data is close to accurate in the given years and within the given period of analysis per country.

Analysis of the Data

The World Bank data shows various aspects of the country. Apparently, there are general categories that the World Bank uses in the analysis and the data collection system. The data includes the name of the country, the country code, the year of the data collection, the global region where the country exists and the income group of the country that is under analysis. Among other indices that are presented in the report, there are other financial institutions assets to GDP (%), private credit by deposit money banks to GDP (%), bank deposits to GDP, and financial systems deposits to GDP, to mention but a few (International Monetary Fund 2008, p. 19). The data also incorporates the high income, low income and middle income countries where there is the World Bank. The data covers the time from the 1970s to the present date. The time period is a significant factor with regard to global economic transitions that have an impact on the global economic environment. The 1970s marks the end of the World Wars and the beginning of global economic growth. 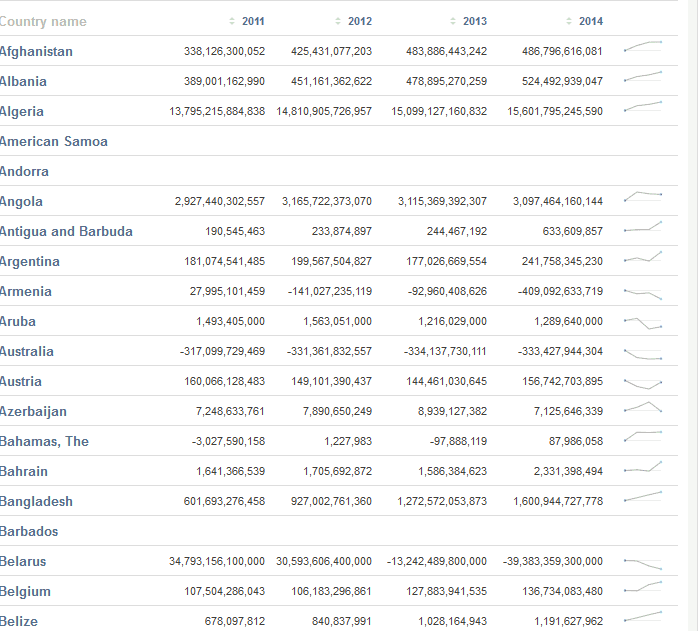 The data on the domestic credit provided by the financial sector sheds more light on the financial stability of the counties that are under analysis. The value of the data on the domestic credit that is provided by the financial sector includes the value of the total debts allotted to various sectors of economy except the national government of the country (International Monetary Fund 2009, p. 59). It is possible to make an assumption that the money that is channelled to the sectors of the economy is used for economic development of a country. It is worth saying that the values of the data on the domestic credit are in proportion to the gross domestic product of a given country. The table below shows the values of the gross domestic products of various countries that the World Bank data encompasses. 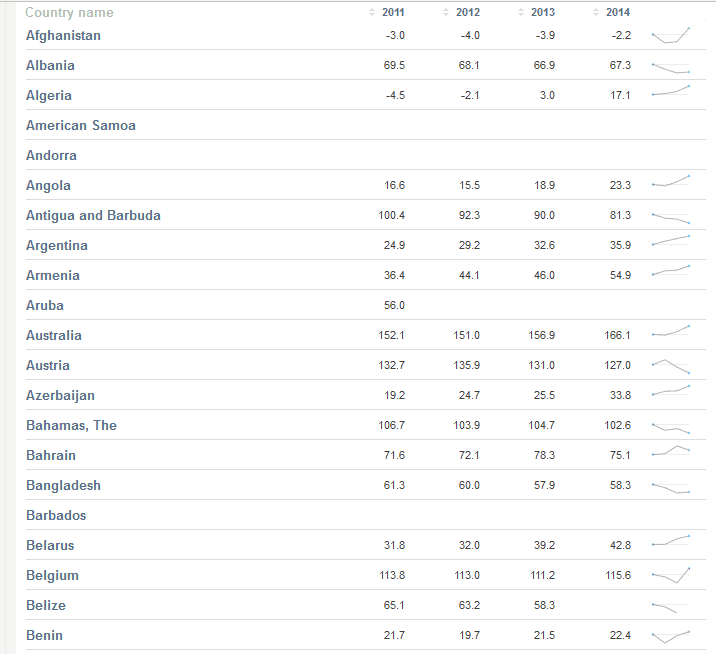 The domestic credit provided by financial sector offers an insight into the financial stability of the countries that the World Bank studies. Talking about the domestic credit, it is the totality of the loans and financial products that financial institutions in a country offer to the private sector (Krishnamurti & Lee 2014, p. 75). The private sector makes a major contribution to the economic growth of a country, especially the developing countries. The increase in the credit within the private sectors means that there is a stipulated increase in economic processes and activities within the country. As such, there is growth that is predicted in the sectors of the economy of the country. The positive economic growth enables the country to minimise the volume of imports that it has to make in addition to increasing the surplus goods that the country can export to the other regions (Krishnamurti & Lee 2014, p. 75). The table below shows the domestic credit provided by the financial sector on some of the countries that are sampled by the World Bank. 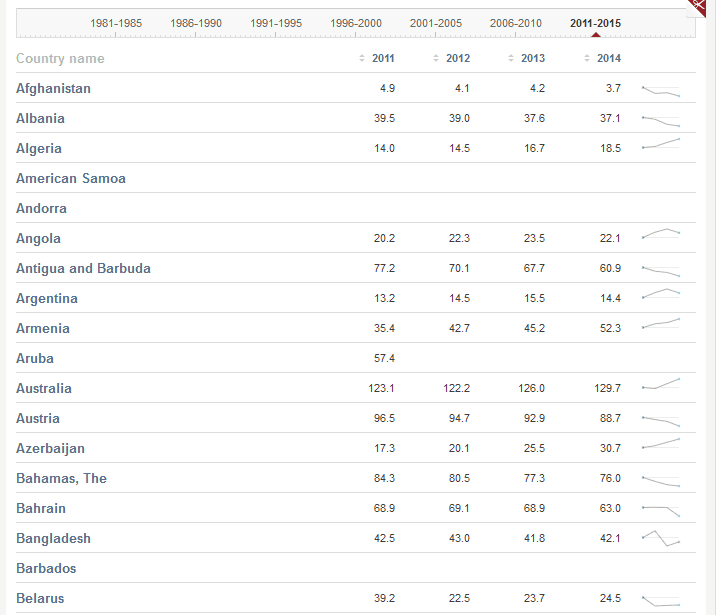 There is a predictable economic growth that is evident from the data on the financial state of the countries that are presented in the World Bank. Therefore, the countries depict the improved state of financial stability in the country. The data presented and discussed above offers an insight into the data categories that are under discussion. Thus, the credit by deposit money banks to the GDP is the indication of the financial assistance that financial institutions in a country offer to the local business in comparison to the GDP of the country. The increase in the borrowing capacity of a country affirms that the economy has the ability to protect the financial shocks from recessions, thereby affirming the stability of the economy of the country. The financial systems deposit to GDP is also a critical factor to consider in determining the level of stability of currency of a particular country. When the rates of the deposits in the financial institutions increase, the probable scenario is that the discretionary income and total savings of the household in a country are on increase. The information further suggests that the countries are experiencing stability of their incomes and inflation rates are low to handle increased savings. Therefore, the sampled countries are characterised by strong financial market structures and growing financial stability.