Hurricanes sometimes can be devastating and develop over warm ocean waters around the equator; therefore, they are often referred to as tropical cyclones. Hurricanes are prevalent in the Caribbean because of the effect of both the Pacific and Atlantic oceans in which it is strategically configured. The warm moist air over tropical water masses rises followed by a sharp drop in the atmospheric pressure. Air from the surrounding areas will then experience higher atmospheric pressure and begin whirling towards the low-pressure zone where it replaces the void left by the rising moist warm air. Usually, when air is heated, it rises and descends upon cooling. With continued warming, air begins rising and cold air emanating from zones that have higher pressure replaces it. As the warm moist air rises, it cools upon reaching condensation level and thus forms clouds which would result into rain. Storms created north of the equator move as they spin in a clockwise direction, whereas those formed south of the equator spin anticlockwise. One of the most destructive and horrible hurricanes is Sandy, which took place in 2012. This essay describes its nature and how it adversely affected a town in the Caribbean, specifically, Pinar del Rio, a Cuban town located in the South West direction from Havana. It also shows how the insignificant populace of this town had to cope with the aftermath of the hurricane and how I moved in to protect as many people, buildings, and livelihoods as I could against a possible hurricane in the future.

As mentioned earlier, the hurricane Sandy was one of the deadliest hurricanes that ever hit the Caribbean, especially Cuba. It occurred in the year 2012 on 25th and 26th October. Though not many fatalities were reported, a significant number of properties were destroyed and many people rendered vagrants. According to the Institute of Meteorology (INSMET) report, the worst damaged areas were Pinar del Rio, Guantanamo, and Santiago de Cuba. It is estimated that these three towns experienced massive destruction of property which approximate worth was $81billion.

Sandy’s maximum winds stretched from 20 to 30 nautical miles whirling at an incredible velocity of 175 kph (110 mph) spreading in all directions after forming at the Bahamas. The storm which only lasted for less than forty-eight hours cut power and toppled trees inconveniencing people’s lives, especially the tourists. Residents and tourists had to from vulnerable areas under our well-rehearsed hurricane evacuation procedures. Hotels had set up generators to provide emergency power as heavy rains were still falling throughout this storm-stricken region.

As a member of the Disaster Management Unit, I managed to save numerous lives, even amid inundating the magnitude of destruction. Quite a significant number of people had been trapped in rubbles of collapsed buildings while others lay in flooded areas as their vehicles had been swept miles away from the roads. The majority of the hurricane’s victims was extremely worn out due to fatigue, hunger, and dehydration by the time we managed to rescue them. Emergence service unit was standby to offer first aid and other medical and psychological support to them to expedite their recovery.

However, it is presumed that fatalities could have been completely avoided had the inhabitants of Pinar del Rio heeded a warning and advice by INSMET a few days before the ordeal. By doing so, the population could have vacated the vulnerable points. I would suggest that the government should come up with strategies to resettle the survivors in safer areas and help them reconstruct their lives once again. Furthermore, people should be restricted from settling in areas susceptible to hurricanes as a way of mitigating the scope of destruction should such disasters occur again.

During and after the hurricane Sandy, my colleagues from the Hurricane Rescue Mission and I embarked on the exercise of securing boats and maritime industries. I had to authorize all captains to anchor their boats in a designated location where they were believed to be safe from being blown away should the hurricane be imminent again. We also contracted expert engineers to construct concrete breakwaters which would protect the bays and inlets against huge waves hitting, especially the maritime industries. Similarly, we had to ensure that all the oil drums are properly anchored lest they become a hazard if not well secured. This exercise was done expeditiously and afterward we were sure that boats had a better chance to stay secure and undergo less damage. The industries also continued with their activities with minimal interruption and apprehension.

We also embarked on building school and hospital on highland. The school would be expected to provide a strong shelter for displaced people during such emergencies and the hospital and its staff would take care of the casualties. This work was done so fast because, according to INSMET, signs of another hurricane following Sandy were very high. We also received humanitarian aid from well-wishers and from the UN agencies which highly propelled our projects. As we wound up with these significant constructions, another segment of rescuers was going to execute the building of mangroves. The latter would be vital in the future for dissipating the strength of waves when hurricanes occur again.

Finally, as part of our mission, we distributed disasters educational packs to students so that they could share them with their families. It was one of the efforts of augmenting disaster awareness and encouraging safe practices when such incidents take place. It was observed that many victims who died could have rescued themselves had they known something about the self-rescue mission. However, many continued living in the similar circumstances as if they were absolutely sure that such happenings would never occur again. The Figure 1 and Figure 2 below are from the UNISDR SDS disasters game demonstrating through simulation how people should respond to events such as the one described above. 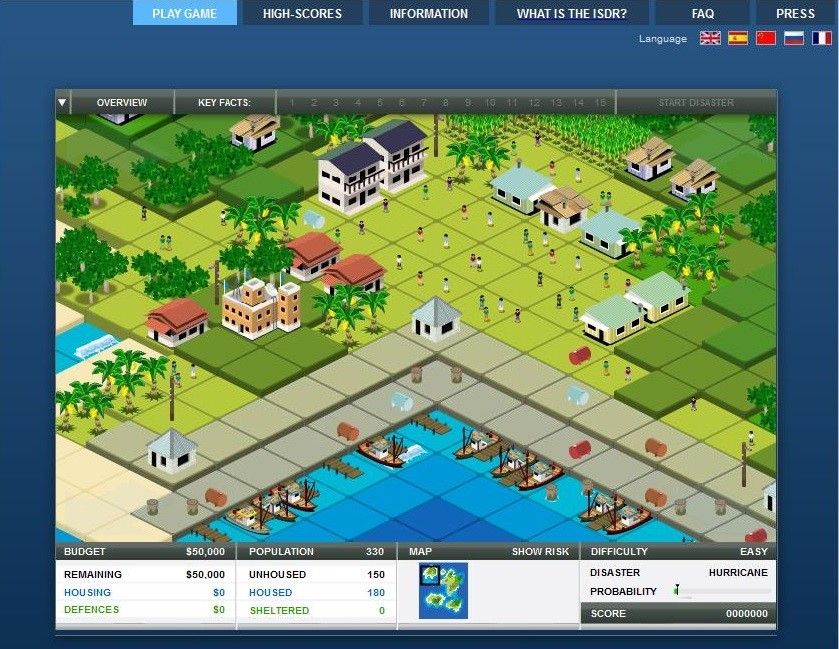 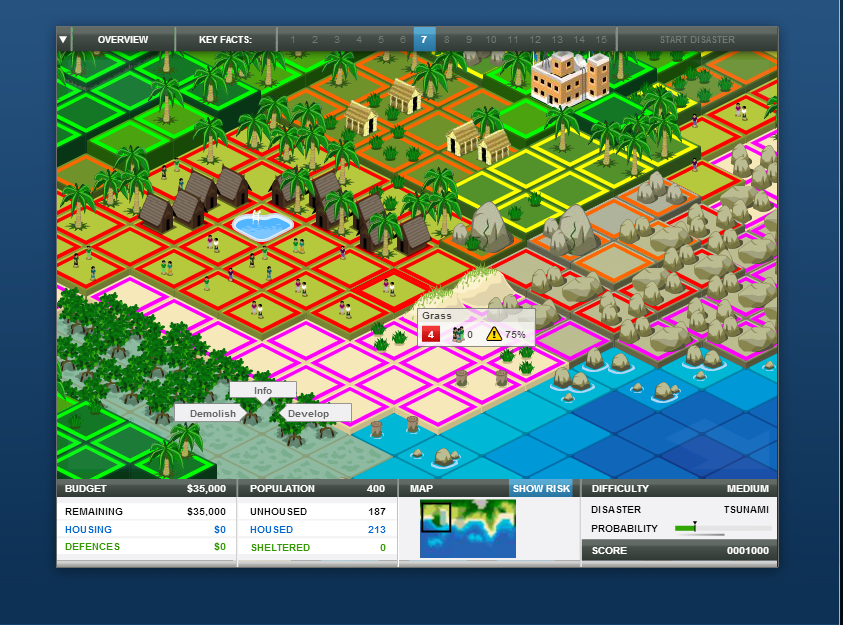 Important Lessons to be Learned From Hurricane Sandy

The Cuban government must have learned quite some vital lessons from the devastation caused by Sandy in order to curb future eventualities coupled with hurricanes. One of the lessons derived from the ordeal was that people needed to notice the rise of the sea level. The INSMET has proven that the sea level has risen by at least 0.3 meters over the last century. This factor poses a serious risk to Pinar del Rio since it is highly prone to immense flooding. Having noticed that, people ought to take precautionary measures of always relocating whenever hurricanes are imminent.

Furthermore, the disaster management unit had previously initiated a mechanism of constructing a storm barrier system around the coast in response to the Hurricane Ilk that had occurred in 2008. However, it could not serve the intended purpose since it had a gate that was letting ships, fish, and water in and out; therefore, it was not effective in controlling floods.

On the other hand, the city planners have recommended building elevations to lower the risk of flooding. Moreover, in case the risk becomes too big to manage, they can resort to a managed retreat strategy where people can practically move to safer places other than clinging to a place of looming disaster. Cubans should seriously learn from what happened in the Netherlands, which employed the legal tool dubbed ‘land re-adjustment’ to successfully aid residents in evading storm related disasters. The government had to literally vacate people from all areas that were below sea level and relocated them to safer grounds not predisposed to flooding. Thus, hardly would one hear of hurricane fatalities in Holland though the disaster has hitherto been a common phenomenon in the country. Contrary to that, citizens in Cuba have the discretion to choose where to construct but they would rarely consult landscaping engineers for necessary advice on the suitability of the construction site. The Cuban government has also failed to enact the requisite regulatory acts that would ensure that people only concentrate on developing places that are completely safe from natural disasters such as hurricanes to mitigate the risks of losing lives as well as properties.

Finally, bearing the uncertainty in mind, the Cuban government and its citizens should re-envision the city via density pattern alteration to incorporate more parks on the waterfront. Some changes should also be done regarding the infrastructure. For instance, the modification should be done to the electric grid and adequate efforts should be made to empty the lower basement of skyscrapers as they redesign them for vehicle parking slots. Similarly, they should halt any developments on vulnerable sites since that will be tantamount to putting people’s safety on the brink. The government of Cuba should also put mechanisms in place to preserve the prevalent sand dunes along the Cuban coastline. During stormy hurricanes, they protect the dwelling places by causing a dragging effect which reduces the power of the storm before it reaches inland.

Hurricanes are among the worst disasters with which Cuba has grappled in the oast. It is obvious for one to argue that hurricanes are mere natural disasters which humans cannot prevent and that their occurrence is often mysterious. However, the INSMET and other climatic agencies that can forecast their occurrences and forewarn dwellers appropriately to avoid the last minute rush must initiate much effort. Residents are also required to take early warnings seriously to eventualities. Although many lives and property have consistently been lost during these disasters, it is expected that few or none of the lives could have been lost.