Graffiti as Political Participation and Communication

In different societies, democratic systems provide open access to political leadership and active participation of the people of the land in political power. The political involvement of the citizens is an action they conduct to influence decisions on various levels of the societal, economic, and political system. One form in which individuals in a country participate and communicate politically is called graffiti. Initially, graffiti artwork was used by Ancient Greece, Urban Gangs, and Roman Empire to mark their territories (Dobratz, Waldner, & Buzzell, 2011). It also served social and political purposes at times. Currently, this form of art is broadly used in election campaigns, as many politicians as well as some select individuals have become particularly interested in it. Graffiti has become a major inspirational way of how one conveys his/her thoughts and ideas in an enticing and appealing way (Dobratz, Waldner & Buzzell, 2011). On the one hand, it is a form of political participation; while on the other hand, it is a way of communication. They both have an impact on public relations and perception, because they tend to influence political debates, agenda setting, and decisions. The paper, therefore, focuses on the analysis of graffiti as a form of non-conventional political participation. 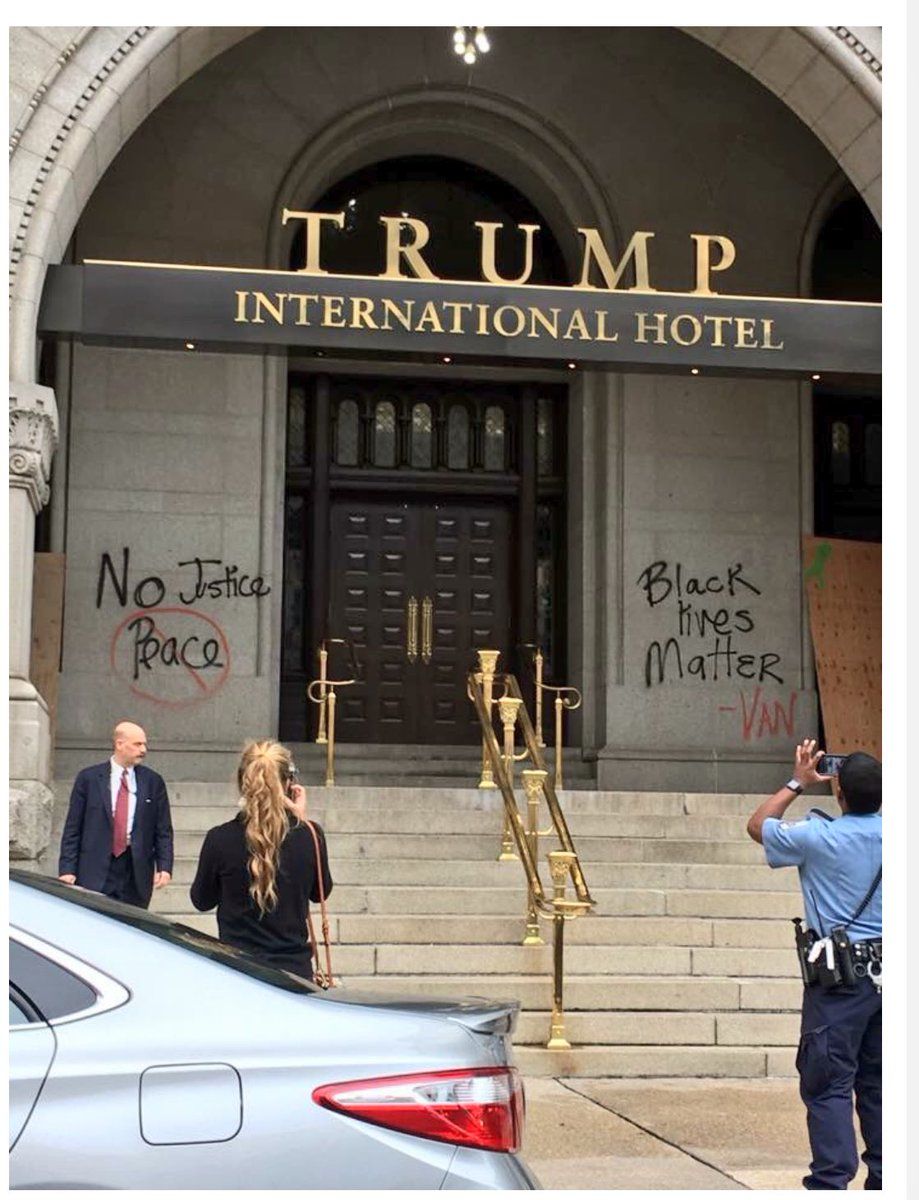 The ‘Black Lives Matter’ and ‘No Justice No Peace’ graffiti, an act of vandalism that defaced the front of Trump’s new hotel in DC, is a message that symbolizes the Republican presidential front-runner as a racist. The graffiti does signify not only the Blacks alone but also all the minority groups in America. Trump was very careless in the past with his racial opinions and how he handled people of color. His companies and some of the organizations he headed have faced allegations and some lawsuits accusing him of mistreatment of the minority groups (Adhikari, 2016, para. 5). This message means that every person regardless of his/her skin color matters, and Trump should acknowledge that fact. Justice comes with the prevalence of equity for all humanity; hence, where there is a lack of those attitudes, peace cannot prevail.

This Graffiti is political one because of the person it targeted. Trump is seeking election to become the president of the United States and thus the graffiti is political. Furthermore, since the 2008 election when President Barack Obama was going to be the first black president, Trump was a notable player due to his fueling the race anxieties (Adhikari, 2016, para. 5). He made several allegations against the president Barrack Obama. The vandalism partially occurred as a result of Trump calling Mexican immigrants rapists and criminals, which were regarded as insults to the minority groups. People in America are seeking a leader that will lead them by exercising the rule of law without prejudice and impartiality. Thus, Trump’s careless words show what he believes in and how he will run the government that is constructed by mixed communities.

The graffiti on the front of Trump International Hotel, which is in the same place as the Old Post Office building that belonged to the Federal government, was drawn days after his inauguration. The location of the graffiti is aimed at defacing a corporate sign due to Trump’s previous boasting about the place which some viewed as a political rick-roll. The artwork intended to demean the Republican leader, to show him that success is not the only condition necessary for defining a leader. A political chief should value people more than money, so as to succeed in his/her endeavors. If he had no intention of respecting people of all races, then they also will not appreciate his properties, thereby lacking peace in the land.

Responses to the Graffiti

Some of the interpretations were not political as some respondents perceived graffiti as the act bigger than a crime. These individuals condemned the work performed by anonymous person without any attempts to understand the message. Other people regarded the information as useless, since the manner to convey it was not proper. The advocacy of the message of the graffiti would have received much celebration if the conveyor had used conventional means (Dobratz, Waldner & Buzzell, 2011).

There are some common themes such as racism and inequality (Adhikari, 2016). It is evident that Trump makes an impression of a racist to some individuals. Hence, many people concurred with the message expressed by means of the graffiti asserting that Trump is a racist indeed. The Republican leader had allegedly made several racist comments both publicly and while doing his job. Owing to the racism, inequality appears to be a widespread issue in some areas in the US. Trump’s potential regime instils fear in some individuals, because they suspect that discrimination will become the dominating factor in his government.

Most of the people that loathed Donald Trump are women. It is likely that a vast majority of women are against him ever being a ruler of the United Sates. The women are mostly the ones that ascertained Trump’s racist behaviors. One can make an assumption that since his presidential opponent is a woman, the women see Trump as an enemy and they will be quick to emphasize his flaws (Adhikari, 2016). The men are the ones supporting Trump and his potential regime. The majority of the men saw graffiti as an act of vandalism and condemned it. They are the people who approved the use of conventional means instead of the graffiti. It is quite evident that men are fervent supporters of Donald Trump’s regime.

Graffiti as a social medium gives the people a voice that would have otherwise not been available for the “little people” in the society. Most social media platforms are overcrowded with corporations that leave no chance for the proletariats in the society. Thus, graffiti gives any person, young or old, wealthy or poor, the power that they would not have under other circumstances. Therefore, anybody eyeing a political post should seriously consider the messages displayed by voters with the help of graffiti and behave appropriately, since graffiti plays a significant role in democracy and may influence the voting pattern in the United States.