A social worker must understand that a community is a group of people living in similar conditions or situations. This could also be a geographical location or some shared values. Thus, a community is built together with shared values and practices. Their practices, beliefs, and way of life are very important to them (Netting, Kettner, McMurtry, & Thomas, 2011). A community could be small or large. In our case, we will consider a large group of people living in a certain geographical location related by shared beliefs and a way of life. Merriam Webster dictionary (n.d.) defines a community as a unified body of individuals.

Understanding the make-up of a community, or its demographics, characteristics, structure, and decision-making is essential in analyzing a community. Anyone can tell how a community lives if information about these areas is availed to them (Hardina, 2013). A social worker must analyze a community by being a part of it through programs like community service or immersion. Some of the techniques used include conducting dialogue, listening to stories, and organizing the structured group work (Hardina, 2013).In this particular brief, we are going to discuss the makeup of the Brasilias community. We will review the citys demographics, economic characteristics, government structure, and different levels of decision-making within the community.

Demographics are statistical, quantifiable measures that describe a communitys population and include such data as total number of residents, population density, the breakdown of ethnicity and religion, median incomes, poverty and crime rates, educational attainment, renters vs. owners, and immigrant vs. native born among other factors. This paper will study the Brasilia community that is the seat of Brazil government and its capital city. 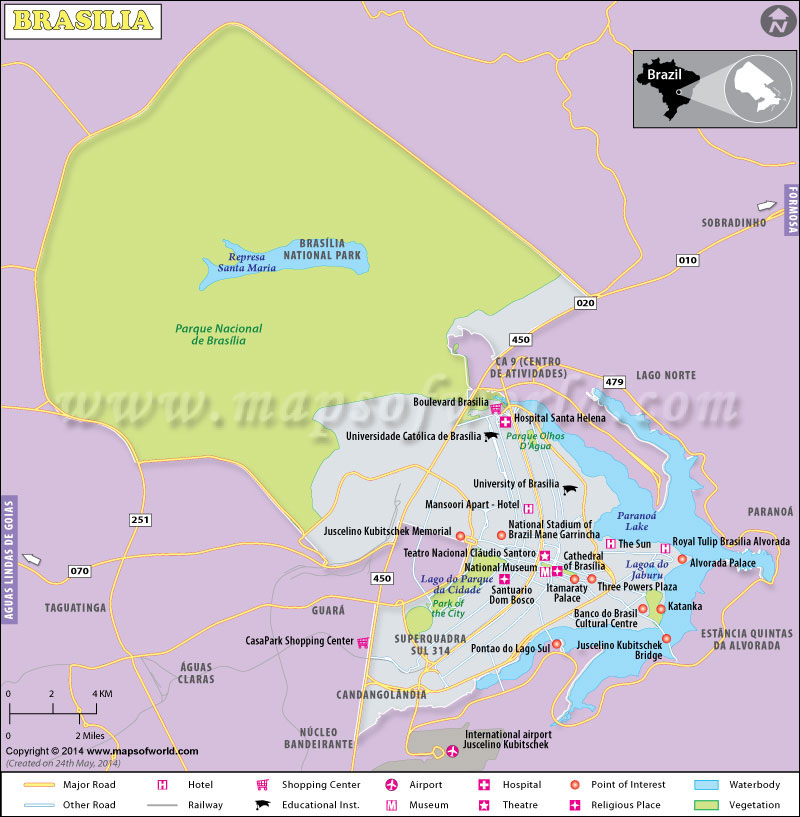 The community of Brasilia is made up of pure whites, Asian-Brazilians, and African-Brazilians (Phillips, 2011). The census results show that 50.7% of Brasilia residents confess that they are either of black or mixed race and 47.7% say that they are white (Phillips, 2011). This means that the black man has risen to recognize his identity. Whites had dominated the city for a long time, with poverty levels and education levels extremely low among blacks. African-Brazilians had been affected by slavery and low self-esteem. The lack of resources to go to school caused them to have poor education, which had highly contributed to their low self-image. The statistics reveal that this situation changes with time, and for the author, it is clearly a significant change in favor of African-Brazilians. While moving around Brasilia, one will see a mixture of all types of people. The immigrants seem to be doing better economically than the locals. The people of Brasilia are a mix of races and all classes. Life is hard for the poor, but everyone must survive.

Weaknesses of the Brasilia community

Racial prejudices. For blacks, prejudice and discrimination are observed almost in all sectors of the Brasilia City. Senior civil servants confess that discrimination in the capital does not consider ones status or position. It is wildly spread all over across the City (Phillips, 2011). Moreover, more than 80% of the wealthiest group of Brasilias is white people while the rest are African-Brazilians. Among the poor Class E, only about 24% are whites. This has created a huge gap between the poor and the rich, leading to the too few opportunities for African-Brazilians. This means that they will do fewer businesses and while walking along the street, one will find many African-Brazilians as beggars in the street. Unfortunately, African-Brazilians have remained servants with low paying jobs. The white people remained the most educated part of the community with some of the best skills. Thus, they are qualified for the well-paying job. This created the huge gap economically and increased racial prejudices even in placed where African-Brazilians are in high positions.

High pricing of businesses. Many things sold at Brasilia’s stores are overpriced. For example, a mid-size car costs $50,000. This has caused getting into business very hard. Starting a business and running it in Brasilia seems like a nightmare for the regular people. The leaders work hard to help them in their business endeavors, but it takes the intervention of the international institutions to help Brasilia manage its business policies. There is also a decrease of trade because of the high taxes (or tariffs). Consequently, this hinders international trade. Studying this among the people helps the government and other non-governmental institutions to streamline their policies to help the residents of Brasilia.

High unemployment. The economy of Brasilia cannot support the high population. Thus, many graduates cannot find jobs. Since the number of graduates cannot be matched by the number of jobs created yearly, a gap is created within the economy. Another factor that contributes to high unemployment is that the education does not qualify the people for the jobs available. Therefore, many business owners pay more to the workers they already have to cover the gaps.

Strengths of the Brasilia community

Faster paying debt. The beauty of this community is the efficient management of the public debt. The government enforces high tax rates to its people and uses the resource to pay its debts while meeting other needs of the country. Brasilia pays its debt faster than other cities in Brazil. This is truly a plus for the Brasilias leadership.

Industry growth. Today, Brasilia enjoys a high industrial growth as compared to the previous years. Tourism is by far better than in the 1990s. There is improved hospitality sector and sufficient security for the tourists. Because of its beautiful architecture, Brasilia enjoys beauty and glamour in its tourism industry. Other industries, such as soccer and transportation, have also enjoyed tremendous growth. The industries in general have grown by more than 1.1%.

Looking forward to the future. The literacy levels of many people in Brasilia are very low, though not as low as compared to other cities. Many people prefer to avoid solving their problems in hope that their problems will be over soon. However, this is not the case for the government. There have been efforts to build universities and high education institutions to increase the literacy levels among people. There is a demand for all children to go to school in their early years.

Brasilia is a samba city, and many people love music and soccer. Soccer is the spirit of the city and the uniting factor for the people. The spirit of soccer easily destructs the people and it can even dissuade them from receiving education. Many people have built pre-schools and education emphasis has been laid to the people. Many now view education as the pillar that every child needs. The author believes that this is a great step to freedom and economic empowerment of the people living in Brasilia.

Limited offer! Get 15% OFF on your order

There is at least a healthy facility nearby for every resident to use, and the access to a hospital facility is easy for any individual. The only menace to the mothers and families in Brasilia is the Zika virus that has threatened the population growth. Although this may be good for the economy, but in the future, it may destroy the essential values of family and enjoyed health of people.

Brasilia is a democratic city, and it has a democratic government. It is the center of Brazil leadership. Unlike other cities, Brasilia is not divided into municipalities because it is managed by the federal government. The federal government is elected by the people. It is compulsory for all literate individuals between the ages of 18 and 69 to vote. The government is divided into the executive, legislative, and judicial branches.

The head of the executive is the president who is elected for four years. He holds the executive powers of the government. The legislative branch of the leadership of Brasilia is the National Congress and the chamber of deputies with 81 members and 513 members respectively. The judicial branch of the government holds judicial powers. Several democratic parties have contested elections for the federal government, but only alliances have won. Small parties do not have the numbers to win the general election. The opposition keeps the government in check and ensures that public resources are effectively utilized. The government ensures that it uses the collected revenue to develop the country and institutions that benefit the public.

The residents of Brasilia have 10% of the population accessing over 40% of the wealth of the country, while 10% of the population have access to only 1% of the wealth. This gap is so clear to the visitors because the poor and the rich live alongside each other. The crime rates in the cities are very high as compared to other cities in the world. The law enforcement agencies, including the police, are very violent and corrupt, which discourages people from reporting anything. Although education is free, poor municipalities provide poor education to the people. The poor people receive bad education, and the lack of food causes children not to attend school. Although people have the desire to become better, they still hoping for things to become better. The issues of poverty that lead to a vicious circle keep the social worker engaged in many issues that aim to bring solutions to the people. Brasilia is truly a community of great people, with diverse characteristics, and yet they enjoy working with people. Therefore, I would recommend the community and its people to work with for any willing social worker looking for a dynamic community.